What is Boko Haram? 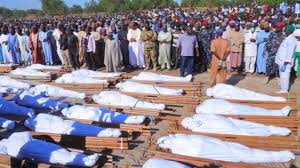 The attack on farm workers in the North Eastern region of Nigeria has left at least 110 dead. The Boko Haram jihadist are blamed for the killing. Around 30 men were beheaded during the attack. The incident is considered as the most violent attack against innocent civilian in 2020.

The attack took place near the Borno state capital Maiduguri in Nigeria.

A terrorist Organisation in Nigeria called Boko Haram has been disturbing the North Eastern region of Nigeria by killing and attacking villagers in the region. The rise of Boko Haram is mainly due to the failure of the Nigerian government to improve the economic conditions of the people in the region.

The North Eastern parts of Nigeria has suffered increased discrimination since the discovery of oil in the south. These discriminations led to the rise of Boko Haram. Boko Haram means Western education is Forbidden.

The Boko Haram was formed based on the principles of Salafism. Salafism movement developed within the Sunni Islam. The movement was launched in response to The Western European imperialism.

According to the UNICEF, Boko Haram has so far kidnapped more than thousand children since 2013. In 2014 alone Boko Haram was responsible for killing more than 6,644 people.

Boko Haram was founded by Muhammad Yusuf in 2002. He established a religious centre that attracted poor Muslim families from Nigeria and also from neighbouring countries. The main objective of the centre was to create an Islamic state.