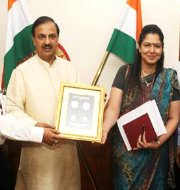 The Union Government has leased a commemorative coin of 200 rupees and a circulation coin of 10 rupees on freedom fighter Tatya Tope.
It was released by the Union Culture Minister Dr. Mahesh on the occasion of the Martyrdom Day of Tatya Tope in New Delhi.
The Union Ministry of Culture has been celebrating the 200th Birth Anniversary of Tatya Tope during 2015-16 in association with State Government of Maharashtra and Madhya Pradesh.