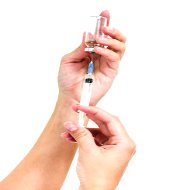 The Union Government has launched inactivated polio vaccine (IPV) injection as part of the global polio endgame strategy in New Delhi.
The vaccine was launched by the Union Minister of Health and Family Welfare J P Nadda in New Delhi.
It was launched as part of India’s next step in Universal Immunization Programme (UIP) to fight against polio virus in the country.
IPV injections do not contain an attenuated vaccine virus which is used in oral polio vaccine (OPV). Thus it reduces the chances of Vaccine Derived Polio Virus (VDPV).
Key facts

It should be noted that India was certified polio-free country on 27 March 2014, but the immunization programme continues since two of its neighbours Afghanistan and Pakistan still remain polio-endemic countries.