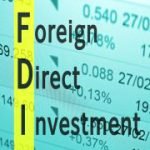 According to UNCTAD’s World Investment Report 2017, India continues to remain as a favourite destination for FDI even though tax related concerns remain as a deterrent for the foreign investors.

Salient Highlights of the Report

According to the report, the favourite destinations for FDI are the US, China and India.
As per the report FDI inflows into a developing Asia has reduced by 15% to USD 443 billion in 2016. This decline is the first since 2012. Other than South Asia, the decline has affected the three sub regions of Asia. However, the report has observed that an improved economic outlook in major economies like ASEAN, China and India is expected to boost investor’s confidence thereby increasing the region’s prospects for 2017. In Asian region, major recipients like China, India and Indonesia have renewed their policies to attract FDI. This is expected to increase the FDI inflows in 2017.
In South Asia, FDI inflows increased by 6% to USD 54 billion and outflows declined by 29% to USD 6 billion.
FDI inflows into India remained stagnant at USD 44 billion. India’s outward foreign flows declined by about one third. Cross-border merger and acquisition deals have become important tools in the hands of the foreign multinational enterprises to foray into the rapidly-growing Indian market. The report has also noted that signing of tax treaty with Mauritius would have contributed to decline in instances of round tripping of FDI.
for the first time, China has emerged as the world’s second largest investor of FDI.
BRICS grouping (Brazil, the Russian Federation, India, China and South Asia), which accounts for 22% of the global GDP has received only 11% of the global FDI inflows.