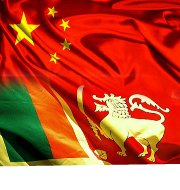 Sri Lanka has signed a US $1.1 billion deal to sell a 70% stake of the strategic Hambantota deep-sea port to China. Hambantota port is a deep-water port in the southern tip of Sri Lanka. It sits close to busy east-west shipping lanes connecting Europe and Asia.
The deal was signed between Sri Lanka Ports Authority (SLPA) and China Merchants Port Holding Co. (CMPort). Under the 99-year lease agreement, CMPort will invest up to US $1.1 billion in the port and marine-related activities. CMPort will be only responsible for commercial operations, while the SLPA will handle port’s operations, security and services.

The port is expected to play a key role in China’s Belt and Road initiative (BRI), which will link ports and roads between China and

Europe. It is also considered that, this deal gives an advantage to China in the bunkering business, which provides fuel to ships.

India is apprehensive that the port is part of Chinese ‘string of pearls’ with an objective to surround India and dock its military vessels. The String of pearls is a geopolitical theory on potential Chinese intentions in the Indian Ocean region. It refers to the network of Chinese military and commercial facilities and relationships along its sea lines of communication extending from the Chinese mainland to Port Sudan. These sea lines run through several major maritime choke points such as the Strait of Mandeb, Strait of Hormuz, Strait of Malacca and the Lombok Strait as well as other strategic maritime centres in Pakistan, Maldives, Sri Lanka, Bangladesh, and Somalia.