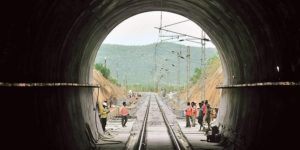 It is situated between Cherlopalli and Rapuru Railway stations in Nellore district, Andhra Pradesh. It will be helpful for decongesting traffic on Vijayawada-Gudur main line.

It is part of 113-km new railway line completed recently between Obulavaripalli– Venkatachalam – Krishnapatnam Port.  The tunnel construction was completed in a record time of 43 months.

The height of tunnel (rail level to roof) is 6.5 metres and Minimum height of contact wire is maintained at 5.2 metres.

The electrified tunnel is an engineering marvel which is constructed in a horseshoe design. It is constructed on New Australian Tunnelling Method, at a cost of ₹460 crore.

This new line would facilitate direct and viable connectivity between South Coast and West Coast Railway. It will aslo improve freight revenue of zone.

It is one of 18 Indian Railways zones. Its jurisdiction zone is spread over states of Maharashtra, Telangana, and some portions of Madhya Pradesh.

It has 3 divisions under its administration, which include Nanded, Secunderabad, Hyderabad.

MoU between Railways and SBI for door step banking

On January 14, 2020, the South-Central Railways and SBI signed MoU to implement door step banking in...

Kacheguda Railway Station in Hyderabad has become the first energy-efficient ‘A1 Category’ railw...