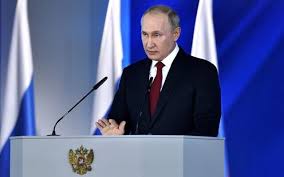 The President of Russia, Vladimir Putin flags referendum for major constitutional changes on Wednesday, 15th January 2020 by shifting major powers of the President of Russia to the lower house of the Russian Parliament called State Duma and also asked for the resignation of Russian Prime Minister, Dmitry Medvedev by stating that the Medvedev led cabinet had failed to fulfill the objectives, which as per media reports the resignation was submitted by the Dmitry Medvedev following which Putin thanked Medvedev for his services and nominated the 53-year-old Mikhail Mishustin for the post of the new Prime Minister of Russia. Mishustin was serving as the Chief of the Federal Tax Services, his appointment as the new Prime Minister will be conducted through hearing at the State Duma on Thursday, 16th January 2020.

The announcements were made by the Russian President before top government officials and lawmakers during his annual state of the nation address, as the new constitutional changes will allow the lawmakers to name the Prime Minister and other Cabinet Members, the authority of which is currently with the Russian President.