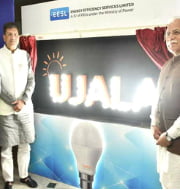 Significance of the programme

The distribution of CESL has resulted in energy savings of 71,99,68,373.28 units per year and the cost savings of Rs 250 crore per year across rural areas of the states covered under the scheme.

Which states are covered under the scheme?

Gram Ujala’s scheme is being implemented in rural households across the states of Telangana, Andhra Pradesh, Bihar, Uttar Pradesh and Karnataka. The programme will be run till March 31, 2022.

Who is supporting CESL?

Under the SHINE programme, the CESL is supported by C-Quest Capital in the entire distribution journey.

CESL is a subsidiary of state-owned Energy Efficiency Services Ltd (EESL), which is a joint venture of public sector companies. It has been established under Ministry of Power. CESL focuses on delivering clean, affordable and reliable energy.