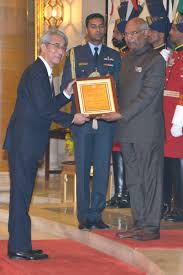 The third Indian Council for Cultural Relations (ICCR) Distinguished Indologist Award for the year 2017 was awarded to Professor Hiroshi Marui of Japan.
He was presented with this award by President Ram Nath Kovind at a function in Rashtrapati Bhavan, New Delhi. Indology is academic study of history, cultures, languages and literature of India and is a subset of Asian studies.

Professor Marui has spent over 40 years working on Indian philosophy and Buddhist Studies. His has many acclaimed publications and research papers to his credit which are considered as final authority on several subjects world. He is President of Japanese Association of Indian and Buddhist Studies and has made significant contribution to Indology in Japan.

ICCR Distinguished Indologist Award is an annual award instituted by ICCR. It carries prize amount of US$ 20000. It is bestowed upon eminent Indologists working abroad who have made outstanding contribution to study, research, teaching of India’s history, philosophy, thought, art, culture, literature, languages, civilization, society etc. The first award was given to Prof. Heinrich Freiherr Von Stietencron of Germany in 2015. Prof. Yu Long Yu of China was awarded in 2016.