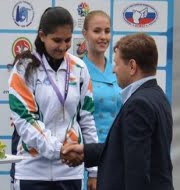 India’s Priyesha Deshmukh (23) has won a historic bronze medal in the first World Deaf Shooting Championships held in in Kazan, Russia.
She claimed the third position with total score of 180.4 in the 10 metres air rifle category and it was her maiden international participation.
In the finals, Ukraine’s Svitlana Yatsenko (201.6) and Serbia’s Gordana Mikovic (200.3) won gold and silver medals respectively.
Priyesha Deshmukh had qualified for the medal or final round after scoring 404.9 in the qualification round. Since last three years, she has been winning national gold in her the handicapped category.