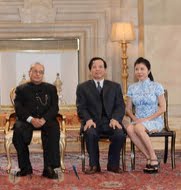 The second Indian Council for Cultural Relations (ICCR) Indologis Award for the year 2016 was awarded to Prof. Yu Long Yu of China.
He was presented with this award by President Pranab Mukherjee at a function in Rashtrapati Bhavan, New Delhi.