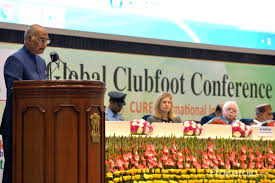 It is one of the most common orthopaedic birth defects where one or both feet are rotated inwards and downwards. It describes range of foot abnormalities usually present at birth in which your baby’s foot is twisted out of shape or position. In clubfoot, tissues connecting muscles to the bone (tendons) are shorter than usual.
Causes: They are unknown (idiopathic), but it may be combination of genetics and environment.

Symptoms of Clubfoot: Top of the foot is usually twisted downward and inward, increasing arch and turning heel inward. The foot may be turned so severely that it actually looks as if it’s upside down. The affected foot may be up to 1/2 inch (about 1cm) shorter than other foot. The calf muscles in affected leg are usually underdeveloped.
Threats: It causes foot deformity, abnormality walking, callus, knock knees, or shortened legs. It can cause permanent disability if not treated early. This affects the child’s mobility and confidence. It occurs in about one in 1,000 newborns. In India, burden of disability affects more than 10 million people.
Treatment: Ponseti method is initially used which involves moving foot into an improved position followed by casting, which is repeated at weekly intervals.Once the inward bending is improved, the Achilles tendon is often cut and braces are worn until age of four. Initially brace is worn nearly continuously and then just at night. In about 20% of cases further surgery is required.