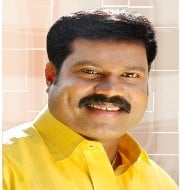 Renowned Malayalam actor Kalabhavan Mani passed away at Kochi, Kerala due to liver and kidney failure. He was 45.
He had had acted in over 200 films in Malayalam and other South Indian languages including Tamil, and Telugu films.