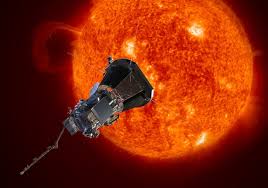 Parker Solar Probe is mankind’s first mission to study outer corona of Sun. It was successfully launched in August 2018 for unprecedented seven-year long journey to unlock mysteries of Sun’s fiery outer atmosphere and its effects on space weather. It is designed and built by NASA’s Johns Hopkins University Applied Physics Laboratory. It is named after solar astrophysicist Eugene Parker, making it first spacecraft of NASA to be named after living person.
Scientific goals

Parker Solar Probe will explore Sun’s outer atmosphere and make critical observations to answer questions about physics of stars. Its data will also be useful in improving forecasts of major eruptions on Sun and subsequent space weather events that impact technology on Earth, as well as satellites and astronauts in space.
The probe is designed to endure harsh environment near Sun, by approaching within 8.5 solar radii (5.9 million kilometers) to ‘surface’ (photosphere) of Sun where incident solar intensity is approximately 520 times intensity at Earth orbit. It will have mission life of seven-year.
It is fitted with thermal protection system (TPS) or heat shield made of reinforced carbon-carbon composite that will allow it to survive temperatures in Sun’s corona. It main systems and scientific instruments are located in central portion of shield’s shadow, where direct radiation from Sun is fully blocked.