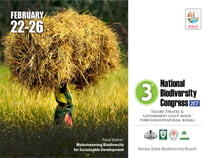 The National Biodiversity Congress (NBC) 2017 was held in Thiruvananthapuram, capital of Kerala. The event is hosted by the Kerala State Biodiversity Board.
NBC is one of the significant biodiversity mega events of the country. It aims to identify practical, evidence-based case studies at the regional level to support the plan of action.