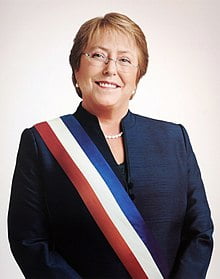 Former Chilean president Michelle Bachelet (66) was appointed as next United Nations High Commissioner for Human Right. She was nominated by UN Secretary General Antonio Guterres and her appointment was approved by UN General Assembly. She will have four year term and shall replace Jordanian diplomat Zeid Ra’ad al-Hussein (served a single term, beginning in 2014).  Bachelet most recently had served as President (first women) of Chile (from 2014 to 2018 and 2006 to 2010). She was first Executive Director of UN-Women between 2010 and 2013. She has also served as Minister of Defence and Minister of Health in Chile.

He/she is mandated to promote and protect the universal exercise and full realization of human rights, across the world, as established in UN Charter. He/she is also principal official who speaks out for human rights across whole UN system, strengthening human rights mechanisms, enhancing equality, fighting discrimination in all its forms, strengthening accountability and rule of law, widening democratic space and protecting most vulnerable from all forms of human rights abuse. The Office was created in 1993. Bachelet will be overall seventh High Commissioner since its creation. Her predecessor Zeid Ra’ad Al-Hussein has been in office since 1 September 2014. His predecessors are: Jos Ayala-Lasso (1994-97); Mary Robinson (1997-2002); Sergio Vieira de Mello (2002-03); Louise Arbour (2004-08); and Navi Pillay (2008-14).