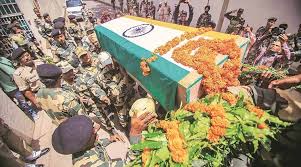 The Maharashtra government has approved an increase in financial assistance given to families of martyred and disabled soldiers hailing from state who lay down their life in the line of duty. The approved four-time increase in compensation from Rs 25 lakh to Rs.1 crore for Kin of martyred soldiers will be implemented from January 1, 2019.

This decision by Maharashtra Cabinet replicates enhanced compensations announced by Centre and some other states, including Madhya Pradesh. After Pulwama attack (on February 14) on CRPF personnel, Centre had enhanced compensation for kin of soldiers, who have attained martyrdom, to Rs.1 crore.

So far, families of martyred soldiers or jawans who lost their lives defending country were getting Rs 25 lakh as ex-gratia, they will now get Rs.1 crore.

Personnel wounded in conflict: Similarly jawans who sustained injuries were getting between Rs 8.5 lakh and Rs 15 lakh, depending on severity of injuries. This amount has now been increased to Rs 20-60 lakh.

Eligible: Personnel who are residents of Maharashtra and have joined any security force like Indian Army, Navy, Air Force, Border Security Force (BSF) and Central Reserve Police Force (CRPF) among others, and get killed in military action even outside country will get compensation,

Also, now the families of martyred soldiers need not come to government office for aide.

If a jawan is martyred, one-time compensation has now been increased to Rs.1 crore.