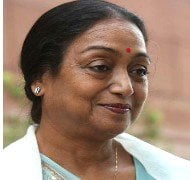 Former Lok Sabha Meira Kumar’s book entitled “Indian Parliamentary Diplomacy – Speaker’s Perspective” was released on 19 March 2015.
The book was released by Lok Sabha Speaker Sumitra Mahajan and its first copy was presented to the President Pranab Mukherjee at a function held in Rashtrapati Bhavan, New Delhi.
The book features an account of the parliamentary diplomacy and its role in furthering foreign policy and strengthening international relations.
It is also a collection of select speeches and reports by Kumar during her stint as Lok Sabha speaker and as leader of Indian parliamentary delegations at several international fora.