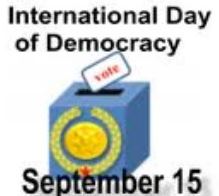 The International Day of Democracy 2019 was observed on September 15. The day is celebrated to promote the tenets of democracy.

The theme of the world democracy day 2019 is “Participation”. Active participation of people is a key for the democracy to succeed.

Article 21 (3) of the Universal Declaration of Human Rights states: “The will of the people shall be the basis of the authority of government; this will shall be expressed in periodic and genuine elections which shall be by universal and equal suffrage and shall be held by secret vote or by equivalent free voting procedures.”

September 15 is observed as International Day of Democracy as it was on this day the Universal Declaration on Democracy was adopted by the  Inter-Parliamentary Union. The resolution for this effect was adopted by the United Nations General Assembly (UNGA) on 8 November 2007 on the initiative of Qatar.

The Universal Declaration on Democracy adopted on September 15, 1997, affirmed its principles, elements and exercise of democratic government and the international scope of democracy.

The Inter-Parliamentary Union is a global inter-parliamentary institution established in 1889 by Frédéric Passy (France) and William Randal Cremer (United Kingdom).

Initially, the organization was for individual parliamentarians, but since then it has transformed into an international organization of the parliaments of sovereign states.