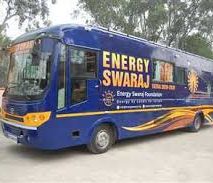 The Union Education Minister, Ramesh Pokhriyal ‘Nishank’, took his ride in the ‘Energy Swaraj Yatra’ bus which has been built by the professor of Indian Institute of Technology (IIT) Bombay, Dr Chetan Singh Solanki.

The “Energy Swaraj Yatra” bus runs on the solar energy. It comprises of a complete work-cum-residential unit. The professor has been travelling on the bus to raise awareness regarding the use of solar power since the year 2020. This yatra will continue till 2030.  While taking the ride, the education minister highlighted that, this project is in line with the “National Education Policy” which comprises of an “in-built framework for imparting skills” with respect to the use of solar energy in schools and colleges. The minister also stated that, this bus has been designed with the objective of creating a public movement for the adoption of 100 percent solar energy.

The bus allows the occupant to perform all the daily activities such as bathing, cooking, sleeping, working, meeting and training. This bus has been fitted with the 3.2 kW solar panels. It is having the capacity of 6 kWh of battery storage.

Dr Solanki has initiated the “Energy Swaraj Yatra” mission in the year 2020 to raise awareness regarding the adoption of solar energy. He is a professor from IIT Bombay who have pledged to not go home until the year 2030. During 2020-2030 he has pledged to live and travel in the solar bus. He was recently made the Brand Ambassador of Solar Energy of Madhya Pradesh by Shivraj Singh Chouhan, the Chief Minister of Madhya Pradesh.