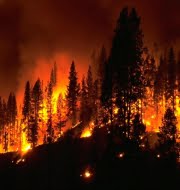 Ministry of Environment and Forests and Climate Change (MoEFCC) and World Bank Report have jointly released report on Strengthening Forest Fire Management in the Country.  The report discusses policies on forest fire prevention and management (FFPM) at national, state and local levels. It also underscores need for comprehensive national policy and guidelines. It provides recommendations on five broad themes – policy, institutions and capacity, technology, community engagement and data and information. It has analysed patterns and trends of forest fires in India and looks at national and international best practices in FFPM.

Forest fires are leading cause of forest degradation in India. Forest fires occur every year in almost every state in India and some districts have been found to be more vulnerable than others. In fact, just 20 districts (mostly located in Northeast India) account for over 40% of all forest fires detected between 2003 and 2016. Similarly, top-20 districts (mainly in Central India) account for about 48% of total fire-affected area, while having just 12% of the country’s forest cover in the year 2000 and 7% of its land area.
Reasons for forest fire: Like in other parts of the world, people are main driver of fires in India and forest fires are distributed close to people and infrastructure. But over longer term, shifts in climate caused by anthropogenic global warming may further alter India’s forest landscape and fire regime.
Relation with Monsoon: India’s monsoons are largely responsible for seasonal nature of forest fires in the country. Forest fires peak during dry months of March or April before arrival of monsoon. The fire season mainly occurs during the four-month period between February 15 and May 15. However it has not clear how drying of monsoon due to reduced contrast in land-sea temperatures (which has weakened engine that drives monsoon) has affected intensity or frequency of forest fires.
Region distribution: Forest fires in Northeast are concentrated in smaller area that is subject to repeat burning. The peak fire season is most concentrated (shortest) in Northeast and Northern state of Bihar. Fires in other regions, particularly districts in Central and Southern India are more expansive. Districts experiencing widespread and frequent forest fires include areas of dry and moist deciduous forest in orderlands of Chhattisgarh, Maharashtra, and Telangana that are affected by fire on nearly annual basis.
Ecological value of Forests: According to scientists from National Remote Sensing Centre (NRSC), fires affecting forests have significant ecological value. Between 2006 and 2015, NRSC scientists forest fires were detected in just under half (281 of 614) of protected areas in India. In 2014, fires burned about 8.6 % of forest cover in protected areas.

The report is significant in light of recently released Intergovernmental Panel on Climate Change (IPCC) special report that explores possibilities of keeping global temperature rise within 1.5 degree Celsius to prevent catastrophic impacts due to unchecked temperature rise. Forest fires contribute to climate change by releasing carbon stored in trees, undergrowth and soil into the atmosphere.
Its findings are crucial for India’s own commitment under Nationally Determined Contributions (NDCs) to create additional carbon sink of 2.5 to 3 billion tonnes of CO2-equivalent through additional forest and tree cover by 2030. It is also expected to be key input in issuing national policy on Forest Fire Prevention and Management (FFPM). Though MoEFCC issued national guidelines on FFPM in 2000, but these are no longer being implemented.