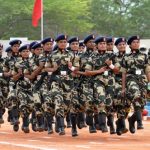 In a first, Central Reserve Police Force (CRPF) has deployed women commandos for undertaking anti-Naxal operations in Maoist-infested state of Jharkhand. A team of women commandos belonging to the 232 battalion’s Delta Company are currently undertaking operations to counter Naxal insurgency in Jharkhand. The women commandos have been provided extensive training in CRPF academies for carrying out anti-naxal operations. The rationale of CRPF behind deploying women in anti-naxal operations is that if Maoists can have women in its ranks, why not the security forces have. Moreover, women commandos will come handy to tackle women Naxals. The commandos have been equipped with modern weapons and software to help them in executing their plan. In India, the states of Andhra Pradesh, Chhattisgarh, Jharkhand and Andhra Pradesh have territories controlled by the Naxals with the support of local population.

CRPF is the largest central armed police force or paramilitary force in India. It functions under the aegis of Ministry of Home Affairs (MHA).  It was established in 1939, under Crown Representative’s Police but after independence it was made statutory CRPF after enactment of the CRPF Act, 1949. Its primary role is to assist States/Union Territories in police operations to maintain law and order and contain insurgency. At present, CRPF is the world’s largest paramilitary force with 228 battalions and over three lakh personnel. Apart from anti-Naxal operations, CRPF personnel also carries out several operations in situations of crisis like terrorist attacks, counter-terrorism operations, rescuing citizens during terrorist attacks among others.

A former minister and an old-time communist leader K R Gouri Amma passed away in Thiruvananthapuram....

ITBP partners with KVIC to procure products for its personnel

The Indo-Tibetan Border Police has signed a deal with the KVIC in order to procure a variety of ‘s...

The President of Philippines, Rodrigo Duterte, recently declared ceasefire with the insurgent forces...

The Union Minister of State for Home Affairs, Nityanand Rai inaugurated the 4th edition of the All I...