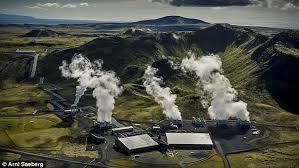 The world’s first negative emissions plant under the CarbFix Project to turn atmospheric carbon dioxide (CO2) into stone has begun operations in Hellisheidi, Iceland. It is intended to lock away carbon dioxide by reacting it with basaltic rocks. Work on the project began in 2007.

In it, the CO2 is captured from ambient air, bound to water, and sent to more than 700 meters underground. There, the CO2 reacts with the basaltic bedrock using enhanced weathering process and forms solid minerals, creating a permanent storage solution.
Currently, the system captures only 50 metric tons CO2, each year, about same emitted by a single US household. It can remove an estimated 50 metric tons of CO2 from the air in a year. It pumps the collected gas deep into the island’s volcanic bedrock, where it reacts with basalt and essentially turns into limestone.