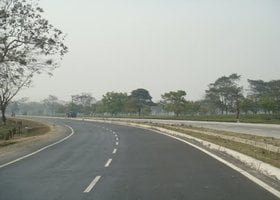 Multilateral funding agency Asian Development Bank (ADB) has approved $346 million loan for highways upgradation project in Karnataka.
The loan funds will be used for Karnataka State Highways Improvement III Project to upgrade 419 km of state highways from two to four–lane widths and improving culverts and bridges along stretch of road.

The project roads will address needs of residents along roads for adequate footpaths, lights, and improvement to curves that pose safety hazards, especially at night.
It will also carry out a road safety survey to identify critical accident spots across the state highways and carry out measures to improve these. Besides, the upgradation will also include construction of planned pedestrian, installation of women-friendly amenities, marked crossings and proper signage.
This is second loan from ADB for improving state’s road network. The total project cost has been estimated to be US $655 million, out of which, state government will provide US $202 million and US $107 will be raised through private sector investment through hybrid annuity contracts.

ADB is a regional development bank which aims to promote social and economic development in Asia. It was established on 19 December 1966. It is headquartered in Manila, Philippines. Now it has 67 members, of which 48 are from within Asia and the Pacific and 19 outside. The ADB has been modelled closely on the World Bank. It has similar weighted voting system where votes are distributed in proportion with members’ capital subscriptions. As of 2014, Japan was largest shareholder (capital subscription) of ADB having 15.7% shares followed by US (15.6%), China (6.5%), India (6.4%), and Australia (5.8%).