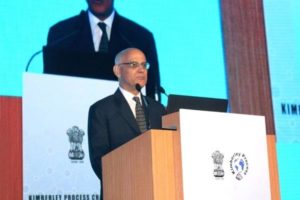 The Appointments Committee of Cabinet (ACC) has approved the extension of Senior bureaucrat Alok Vardhan Chaturvedi by over 3 months, in central deputation as Director General (DG), Directorate General of Foreign Trade (DGFT).

A. V. Chaturvedi is a 1986 batch IAS officer of Bihar cadre. He was given extension beyond 18 June 2019 and will now continue up to 30 September 2019, the date of his superannuation or until further orders whichever is earlier.

Appointments Committee of Cabinet: The ACC decides appointments to top posts under Government of India (GoI). It is composed of the Prime Minister of India, Narendra Modi who act as the Chairman of ACC and Union Minister of Home Affairs, Amit Shah.

Directorate General of Foreign Trade: It is agency of Union Ministry of Commerce and Industry. It is responsible for administering laws regarding foreign trade and foreign investment in India and for execution of India’s import and export Policies. It provides a complete searchable database of all exporters and importers of India.