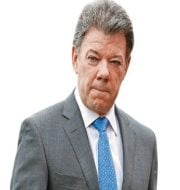 The 2016 Nobel Peace Prize has been awarded to Colombian President Juan Manuel Santos. He was selected for the prestigious award by the Norwegian Nobel Committee for his resolute efforts to bring the more than 50-year-long civil war of Colombia to an end.
He is second Colombian to win Nobel Prize after writer Gabriel Gracia Marquez who had won the literature Prize in 1982.
Santos is also second Latin American to receive Nobel Peace Prize after Guatemala’s Rigoberta Menchu had won it in 1992.
Peace Agreement
Manuel Santos had initiated the negotiations with the guerrilla (rebel) group Revolutionary Armed Forces of Colombia (FARC). These negotiations had culminated into a peace agreement between the Colombian government and the FARC guerrillas. However in October 2016, the peace deal was rejected by a narrow majority by the Colombians when it was put to referendum.
About Juan Manuel Santos