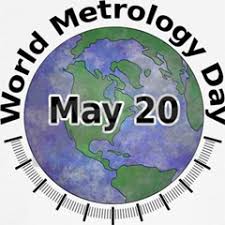 The World Metrology Day is observed every year on 20 May, which commemorates anniversary of signing of Metre Convention in 1875.