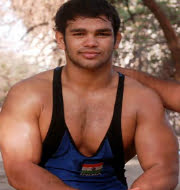 Indian wrestler Narsingh Yadav was banned from all competitive sporting events for four years by the Court of Arbitration for Sport (CAS) based in Lausanne, Switzerland.
He was banned by CAS following an appeal by World Anti-Doping Agency (WADA) as there was no evidence to accept his claim that his food was spiked by banned doping substance.
With CAS ruling, Yadav’s suspension begins immediately and he will not be able to participate in the 2016 Rio Olympics. He had qualified for the 2016 Rio Olympics in the 74 category of freestyle wrestling event.
Background

About Court of Arbitration for Sport (CAS)