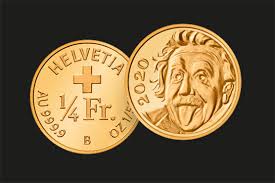 Switzerland has recently minted the world’s smallest gold coin, which bears the famous picture of the great Scientist Albert Einstein with his tongue out. The government-run Swissmint announced that the world’s smallest coin has a diameter of 2.96-millimeter and weighs 0.063 grams. The value of the coin is pegged at 1/4 Swiss francs or approximately Rs 18.50. Swissmint in its official statement informed that a total of 999 such coins have been minted which will be sold along with a special magnifying glass for the owners to see Einstein at a price of 199 francs.

Einstein born in 18979 in Germany’s Ulm city came to Switzerland at the age of 17 and completed his education in the country. He also became a Swiss citizen in 1902 followed by which he lived in the Swiss capital city Bern from 1903 to 1905 at the time when he discovered Theory of Relativity. Another coin featuring the Swiss tennis star Roger Federer was also minted.