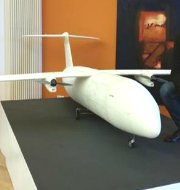 The world’s first 3D-printed aircraft THOR was unveiled by European aerospace company, Airbus at the International Aerospace Exhibition held in Schoenefeld, Germany.
The THOR is short for Test of High-tech Objectives in Reality. It resembles a large, white model airplane but is windowless.
Key features of THOR

All it parts (except the electrical elements) are 3D printed from a substance called polyamide.
THOR’s inaugural flight was conducted near Hamburg, Germany in November 2015. Aerospace companies like Airbus and Boeing already are using 3D printing technology to make parts for their huge passenger jets A350 and B787 Dreamliner.