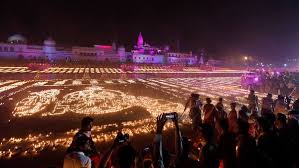 On October 26, 2019, in the city of Ayodhya 4 lakh earthen lamps were lit along the banks of Sarayu river. The event was organized by the Uttar Pradesh CM Yogi Adityanath. It was the third and largest Deepotsav in Ayodhya after he came to power.

Last year around 3 lakh lamps were lit. The lamp lighting festival comes ahead of SC judgement on Ram Jan Bhoomi.

The river flows through the Indian states of Uttar Pradesh and Uttarkhand. It is formed at the confluence of rivers karnali and mahakali. It is a tributary of River Ganges. At Ayodhya, the birth place of Lord Ram devotees take dip in the Sarayu river. The river has spiritual significance and is well related to epic Ramayan.