Why is North Korea planning to suspend nuclear talks with US? 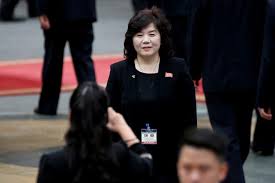 North Korean regime has stated that it will suspend all talks with the United States and may also give a second thought about its missile and nuclear test ban as Washington is unwilling to make any further concessions. Choe Son Hui, the Vice Foreign Minister has held the US officials for responsible for the failure of the Hanoi Summit between President Donald Trump and Kim Jong Un the leader of North Korea. She also said that both Mike Pompeo, US Secretary of State and John Bolton, National Security Adviser “created the atmosphere of hostility and mistrust, and therefore, obstructed the constructive effort for negotiations between the supreme leaders of North Korea and the United States”.

Russian TASS news agency has quoted that, “We have no intention to yield to the US demands (at the Hanoi Summit) in any form, nor we willing to engage in negotiations of this kind”.

It is expected that the North Korean leader Kim Jong Un will soon make an official statement about his position on the issue of the denuclearisation talks between the US and North Korea. He will also tell his nation about the next possible actions of the Korean regime on the issue. There has been no official statement made by the US State Department or the White House on the developments. Choe further warned that the US has missed an excellent opportunity at Hanoi and this may force North Korea to reconsider the moratorium on missile launches and nuclear tests.

In an official statement, the South Korean Presidential Blue House stated that “We cannot judge the current situation based solely on Vice Minister Choe Son Hui’s statements. We are watching the situation closely. In any situation, our government will endeavour for the restart of the North Korea-US negotiations”. South Korea has a hopeful agenda to engage with North Korea which is in-turn dependent on Pyongyang and Washington ironing out some of their differences.

The second summit between US and North Korea had again failed to reach any logical end primarily over the differences about the US demands for prior denuclearisation of Pyongyang  and the North Korean demand of relief from the international sanctions which have been imposed on both the nuclear and missile tests which it has been taking up for years in complete disregards for the resolutions of UN Security Council.

US Special Representative for North Korea, Stephen Biegun has said that the US does expect and want to continue the close engagement with North Korea although no specifications about the future talks have been given. John Bolton had stated last week that North Korea may be faced with tougher sanctions if it did not denuclearise.