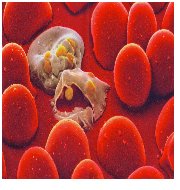 On November 17, the World Health Organization unveiled a new strategy to combat antimalarial drug resistance in Africa. It was launched during the World Antimicrobial Awareness Week – the annual international campaign that raises awareness about antibiotic resistance.

Malaria is caused by a parasite that spreads to humans through the bites of infected mosquitoes. While this disease is rare in temperate climates, it is highly common in tropical and subtropical countries.

How are malaria patients treated?

Artemisinin and its derivatives are isolated from the plant species named artemisia annua. They are well-known for their potential to quickly reduce Plasmodium parasite counts in malaria patients’ blood. ACTs combined with partner drugs minimize the number of parasites during the first three days of the treatment. The partner drugs eliminate the remaining parasites and treat the infection.

Why was the strategy launched?

Recent reports from Africa found that parasites are increasingly becoming resistant to artemisinin. There is also resistance to ACTs. This has been a major concern in several African countries, especially Uganda, Rwanda and Eritrea.

Africa is currently highly dependent on artemisinin-based combination therapies (ACT). Resistance to artemisinin and the partner drug in ACT therapy result in an increase in treatment failure rates. This can cause a major hurdle in the global fight against malaria.

What are the objectives of the new strategy?

The new WHO strategy makes use of the knowledge obtained from earlier and current global programmes. It seeks to minimize consequences of antimalarial drug resistance in Africa through four pillars: