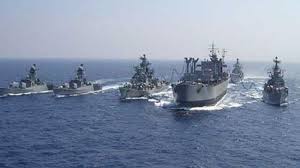 The seventh edition of maritime exercise IBSAMAR was organized from October 10 to 12 in South Africa.

INS Tarkash is a Talwar class guided missile frigate built by Yantar shipyard in Russia’s Kaliningrad. It is a modified version of Krivak III-class frigates. The naval vessel was commissioned into the Western Naval Command on December 27, 2012. Majority of equipment in the ship is Russian-made. However, it also has numerous Indian-origin systems. In August 2022, INS Tarkash took part in a Maritime Partnership Exercise with the Brazilian Navy. The exercise involved cross-deck landing, replenishment at sea (RAS) approaches and other tactical manoeuvres. The frigate also hoisted the Indian Tricolour on August 15 this year at Rio De Janeiro (Brazil) as part of the Azadi Ka Amrit Mahotsav. In 2015, it was part of the Operation Raahat, which was launched to provide protection and assistance to Indian vessels and aircraft involved in the evacuation of Indian citizens from Yemen during the Saudi Arabia-led military intervention in the civil war.