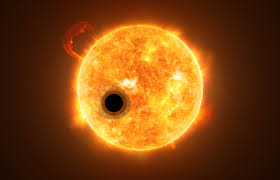 The researchers studying about the WASP-107b have recently found that the core mass of the giant exoplanet is much lower than what was previously assumed.

WASP-107b is an exoplanet and was discovered in 2017. Earlier, the scientists believed that the planet was huge in size due to its huge gas envelope that surrounded the planet. Also, the scientists believed that such huge gas envelopes are possible only with massive and dense cores. However, the recent study says that the cores of WASP-107b are not as dense as thought earlier.

WASP-107b has a comet-like tail. This is because, the helium absorption occurring in the atmosphere of the planet has increased the temperature to five hundred degrees Celsius. This makes it one of the hottest known exoplanets. Such huge temperatures are boiling off its surfaces. This leaves a comet like tail as WASP-107b is revolving around its star.