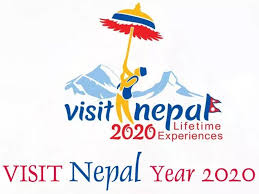 The President of Nepal, Bidya Devi Bhandari on Wednesday, 1st January 2, 2020, launched an ambitious campaign named  ‘Visit Nepal Year 2020’ to promote tourism in Nepal. The campaign aims to attract more than 2 million tourists in Nepal during the year 2020. The President of Nepal inaugurated the campaign by lighting up the Flame of Unity at the launched event, which was organized in the Darsaratha Rangashala Stadium located in the capital city of Nepal, Kathmandu. From India, the Minister of State(Independent Charge) for Tourism and Culture, Prahlad Singh Patel attended the event.

With the campaign, the Government of Nepal aims to increase the tourism sector’s contribution to the country’s Gross Domestic Product (GDP) to 10 percent.  At present, out of the total GDP of Nepal, the tourism sector has contributed around 3 percent of it.  Nepal’s list of foreign arrivals has been dominated by India over the decades, with as per October 2019 data, during the first 10 months of 2019, 169,952 Indian tourists visited the Himalayan Nation, followed by 134,28 tourists from China and 77,798 from the United States.