UP Govt. to organise training & performance programme of KHON Ramlila 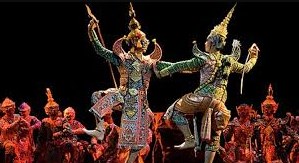 The Culture Department of Uttar Pradesh government is organising India’s first training and performance programme of world famous KHON Ramlila, a masked form of Ramlila art of Thailand, in collaboration with Thailand government.

UP Government will prepare some artists from the state for this art, who will be getting training from experts of Thailand as part of cultural exchange programme between two nations.

A group of officials of culture department of Thailand government and experts of KHON Ramlila has reached Lucknow to train 15 Indian artists in this form of ancient Ramlila. The trained artists will perform at Grand Deepotsav function which will be organised on 26 October 2019 in Ayodhya, UP and later in the other parts of country also.

It is a form of masked dance depicting the scenes of Ramlila. It has no dialogues and background voices narrate complete story of Ramayana, one of the major Sanskrit epics of ancient India. The performance in KHON Ramlila’s is also a famous visual delight for its beautiful attire and golden masks.

KHON Ramlila of Thailand is included in UNESCO’s list of Intangible Cultural Heritage.