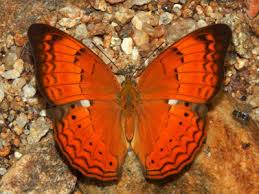 It is also known as Tamizh Maravan (which means warrior).

This butterfly species moves in groups in large numbers, but only in a few places.

It was chosen for honour after both Tamil Nadu Forest Department and state conservation groups decided to work together to identify a butterfly species that could be iconic, easily recognisable and easy to spot, and a the same time serve as another symbol of State.

For the 1st time Tamil Nadu has declared its state butterfly. With this it becomes only 5th in country to do so.

Maharashtra was 1st to declare Blue Mormon as its state butterfly, followed by Common peacock in Uttarakhand, Southern bird wings in Karnataka and Malabar banded peacock in Kerala.