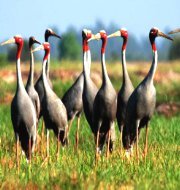 The Study published in the Conservation Biology Journal noted that the chicks of birds that were exposed to noise were smaller than the ones in quiet nests. On the whole 88 birds were put under observation. They were split into two group. One half were bred in noisy environment and the other half were bred in no noise environment.

The entire study suppressed other factors affecting the bird population like air pollution, chemicals, light pollution, etc. The study was conducted on the basis of traffic disturbances alone.