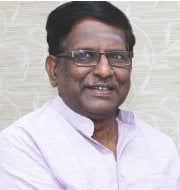 V Shanmuganthan has sworn in as the 17th Governor of Manipur after taking oath at ceremony held at Raj Bhawan in Imphal. He succeeded Dr. Syed Ahmed who had died in late in September 2015.
Chief justice of Manipur High Court Justice Laxmi Kant Mahapatra administered the oath of office to him as per the provisions of Article 159 of Constitution of India.
Presently V Shanmuganthan is Governor of Meghalaya and was given additional charge of Manipur by President Pranab Mukherjee following death of Dr. Syed Ahmed.
V Shanmuganthan is a prolific writer and had written three books related to culture and social aspects in Tamil. He was member of Rashtriya Swayamsevak Sangh (RSS) and had joined it in 1962. Later he had joined Bharatiya Janata Party (BJP) where he had served in many party positions.
Article 153 of Constitution: It says that there shall be Governor for each state. The 7th Constitutional Amendment Act, 1956 has facilitated the appointment of the same person as a governor for two or more states.