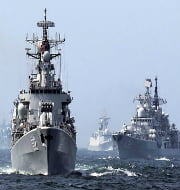 The second edition of coastal Defence Exercise Sea Vigil-21 is to be conducted between January 12 and January 13, 2021.

What is Sea Vigil Exercise?

The Sea Vigil exercise will be undertaken along the 7,516 kilo metres coastline. It involves all the thirteen coastal states, Union Territories and the Exclusive Economic Zone. Also, the exercise involves the fishing and coastal communities. The exercise is conducted by the Indian Navy.

The Sea Vigil is a build-up towards the major theatre level exercise TROPEX that the Indian Navy conducts every two years. Both Sea Vigil and TROPEX will together cover the entire spectrum of maritime security challenges. This includes transition from peace to conflict.

What is Exclusive Economic Zone?

When was the first Sea Vigil exercise held?

How frequently is the Sea Vigil exercise held?

Once in two year. Sea Vigil is a biennial exercise.

TROPEX is Tropical Level Readiness and Operational Exercise. It is an inter-service military exercise that involves the participation of Indian Air Force, Indian Army and Indian Navy. It is generally held at the beginning of the year. The exercise is held to test the combat readiness of the Indian Navy, Indian Air Force, Indian Army and Indian Coast Guard. The first TROPEX was held in 2005.

How is the TROPEX conducted?

What is the significance of the exercises?

According to the US Pentagon, the Chinese PLA Navy is the largest navy in the world. Therefore, it is important for India to maximize its potential in the Indian Ocean region.