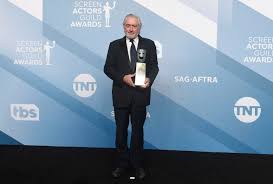 Honoring the best achievements in the film and television industry, the 26th edition of the annual Screen Actors Guild (SAG) Awards was presented on Sunday, 19th January 2020 in Los Angeles, California. The ‘Outstanding Performance by a Female Actor in a motion picture’ was won by Renée Zellweger for featuring in the movie titled ‘Judy’, while Joaquin Phoenix for his role as Arthur Fleck/Joker in the movie ‘Joker’ was adjudged the Outstanding Performance by a male actor.

In the supporting role category, Brad Pitt won the Outstanding Performance by a male actor for his role as Cliff Booth in the movie Once Upon a Time in Hollywood while in the Female category outstanding performance in supporting role was adjudged to Lauran Dern for her role in the movie Marriage story. Earlier on 12th November 2019, American actor, producer, and director- Robert De Niro was announced as the recipient of the 2019 Screen Actors Guild Awards Lifetime Achievement Award.