US Scientists develop micropropulsion system based on liquid water 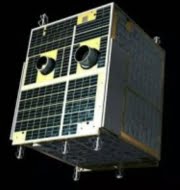 Engineers from Purdue University in US have designed and tested a micropropulsion system called a Film-Evaporation MEMS Tunable Array (FEMTA) thruster that uses liquid water as the propellant for orbital maneuvering of tiny satellites called CubeSats.

CubeSats are basically miniature satellites which typically weigh around two kilograms. In the future, they have potential to carry out tasks like imaging and remote-sensing currently performed by heavier satellites which are expensive to build and launch. CubeSats at present cannot totally replace their larger counterparts as they are incapable of changing orbit or performing complex manoeuvres as they donot have a propulsion system. If CubeSats would be having system would allow such tiny satellites to correct their orbit or maintain their altitude, thereby prolonging their operating life in space before becoming space debris.

The FEMTA system uses an innovative design of small thrusters that deliver bursts of water vapor to manoeuvre the spacecraft into different orbits. It uses pure water as the propellant since it is safe, green, easy to use and free from the risk of contaminating sensitive instruments by the backflow from plumes as in the case of thrusters using chemical propellants.
It uses capillaries thinner than human hair through which the propellant water can flow. Small heaters located near the ends of the capillaries turn the water into vapor, which, on escaping provides the thrust. The minuscule capillaries act like valves that can be turned on and off by activating the heaters. It is compact and not power hungry. The technology is said to be similar to the inkjet printer, which uses heaters that fire dots of ink of ink at the paper.