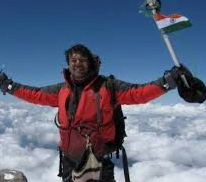 Satyarup Siddhanta, 35-year-old Kolkata mountaineer has set the world record of youngest to climb 7 highest volcanoes, 7 highest mountains in 7 continents in 7 years. He is also the first Indian to conquer the seven mountain peaks and seven volcanic summits.

Satyarup Siddhanta who is 35 years and 262 days broke the record of Australia’s Daniel Bull who was 36 years 157 days when he achieved the feet.
Software engineer by profession, Satyarup Siddhanta hails from Haridevpur in South Kolkata and is based at the Silicon Valley of India, Bengaluru. Reports suggest that had to work different shifts in two companies to raise funds for his mountaineering trips.