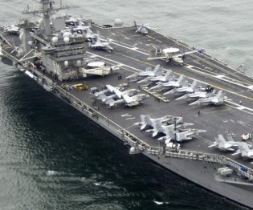 INS Sahyadri is a Shivalik-class stealth multi-role frigate built for the Indian Navy whereas INS Kiltan is an anti-submarine warfare corvette of the Indian Navy. It is the third of four Kamorta-class corvettes under various stages of induction with the Indian Navy.

The two ships are equipped with a versatile array of weapons and sensors and can carry multi-role helicopters and represent the ‘coming of age’ of India’s warship building capabilities.