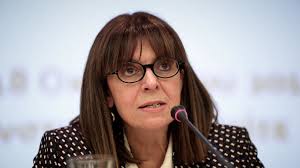 Katerina Sakellaropoulou has been elected Greece’s first female president by parliament on Wednesday. She is the High court judge and human rights advocate. She was elected after her nomination by the conservative party was backed by 261 ministers of parliament in a total of 300 members.

Sakellaropoulou is the first woman president of Greece. She is of age 63 years and an expert in environmental and constitutional law. She will succeed in Prokopis Pavlopoulos, whose five-year term expires in March. She will take her oath of office on March 13. Sakellaropoulou, from the northern city of Xanthi, was also the first woman to head the Council of State, Greece’s top administrative court, taking on that role in 2018 with the support at the time of the government led by the left-wing Syria party, which lost power to New Democracy in an election in July last year.
The daughter of a Supreme Court judge, Sakellaropoulou completed her postgraduate studies at Paris’s Sorbonne University. Sakellaropoulou will be joining a small group of women leading European Union countries.