Sadaiv Atal dedicated to the Nation 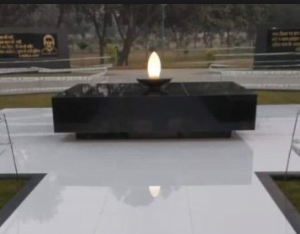 Sadaiv Atal, the Samadhi of Atal Bihari Vajpayee was dedicated to the Nation on the birth Anniversary of the former Prime Minister Atal Bihari Vajpayee.
To emphasise on the unity in diversity, stones from various parts of the country have been used in the construction of Samadhi near Rajghat in New Delhi.  The Samadhi has a central platform comprising of nine square blocks, capped with a Diya in the centre. The number nine represents the navarasas, navaratras and navagrahas. The placement of the nine square blocks is in a circular lotus shaped pattern.