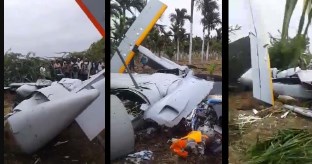 An Unmanned Aerial Vehicle (UAV) called ‘Rustom-2’ belonging to Defence Research and Development Organisation (DRDO) crashed during a trial in an agriculture field in Chitradurga district of Karnataka. No casualties were reported from the crash. According to state government officials, the testing of ‘Rustom-2 UAV was in progress when the incident occurred.

It is a Medium Altitude Long Endurance UAV. It is being developed by DRDO for Indian Army, Indian Navy and Indian Air Force.

It has been designed and developed by DRDO’s Aeronautical Development Establishment (ADE) with its production partners being aerospace major Hindustan Aeronautics Ltd (HAL) and Bharat Electronics Ltd (BEL).

It is being developed on lines of predator drones of United States (US) to carry out surveillance and reconnaissance (ISR) roles for the 3 Indian armed forces with an endurance of 24 hours.