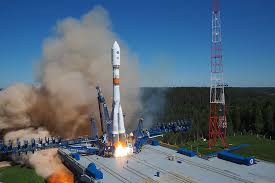 Russia has successfully launched Glonass-M positioning satellite on board of Soyuz-2.1b carrier rocket from the Plesetsk space centre in Mirny, Arkhangelsk Oblast. The satellite is part of GLONASS network GLONASS (Russian acronym for Global Navigation Satellite System) which provides real-time positioning data for surface, sea and airborne objects around globe, at accuracy reportedly at par with US Global Positioning System (GPS). With this launch, there are now total 26 Glonass satellites in orbit.

It was built by Reshetnev Information Satellite Systems (formerly NPO-PM). It has design life of 7 years which is significantly higher than that of previous generation of Glonass satellites. It is about 2.4* 3.7 meters in size with solar array span of 7.2 meters. It has two deployable solar arrays which provide 1600 watts of electrical power. The heart of the satellite is Caesium atomic clock that provides accurate timing reference needed to generate navigation data.

Glonass is Russian Satellite Navigation System considered as counterpart to GPS of US, Galileo of European Union (EU) and Beidou of China. It is being used by military as well as commercial customers. It provides real time position and velocity determination at accuracy that can be compared to that of GPS. It has accuracy of 100 meters as part of public segment and 10 to 20 meters for military users. Its time accuracy is under 1000 nanoseconds. Glonass Program started back in 1976 when development was initiated. The first Glonass launch took place in 1982 and the constellation became fully operational in 1995. Currently, second generation Glonass-M satellites as well as Glonass-K1 satellites are in service. Glonass-K2 and KM satellites are under development.