Rising temperatures drive up farmer suicides in India: US study 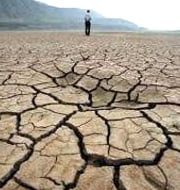 According research report from the University of California, US, climate change may have led to over 59,000 farmer suicides over the last 30 years in India.
The study was carried out using data for all States and Union Territories. It tested the link between climate change, crop yields and suicide by comparing the number of suicides across India between 1967 and 2013 with crop yield and climate data. Data on suicides were collected from the National Crime Records Bureau.

The study has not looked at other factors that could have contributed to suicides. It did not find any adaptive behaviour to prevent suicides in response to climate change.